To share your memory on the wall of Gilbert Lansdale, sign in using one of the following options:

Provide comfort for the family of Gilbert Lansdale with a meaningful gesture of sympathy.

"Big Gill is on the hill! Never worked, never will!"

We encourage you to share your most beloved memories of Gilbert here, so that the family and other loved ones can always see it. You can upload cherished photographs, or share your favorite stories, and can even comment on those shared by others.

Posted Sep 09, 2019 at 02:25pm
Gil was one of the really good guys. I met him a year after I moved to Minnesota and called about Twins season tickets. I bought them from him in 1979 and still have them today. Gil knew how to take care of his customers. He loved people and loved to talk about baseball. We stayed in touch until just a few years ago and I always appreciated our friendship.
Comment Share
Share via:
KF

Posted Aug 28, 2019 at 11:18am
Jeanne and family-so sorry for your loss. Thoughts and prayers are with you during this very sad and difficult time.

Posted Aug 27, 2019 at 10:11am
With sincere sympathy from families of the Kennedy Hockey Boys Booster Club

Posted Aug 25, 2019 at 09:09pm
With our deepest sympathy - please know we are thinking of you, Uncle Gil and Aunt Mary Ann. Love, your cousins in the Williams family. 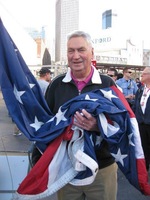