To share your memory on the wall of Wayne Munson, sign in using one of the following options:

Provide comfort for the family of Wayne Munson with a meaningful gesture of sympathy.

Wayne joined the Air Force at the age of 17, in 1954 and served for 4 years as an Air Fueler. He met his beautiful bride, Janette Elizabeth Hansen, after leaving the Air Force in 1959 and they were married in July, 1960 in North Dakota.

Wayne worked as a cost accountant at Trane Company in La Crosse. He remained there for 25 years, until he retired in 1989. Wayne loved to spend time with family and friends, working in the yard, had a love for animals and nature and of course cheering on his favorite teams Mn Vikings and NDSU Bison.

He loved making everyone laugh and smile. Sometimes he had a difficult time finishing a joke because he’d be laughing so hard, knowing what the punch line was going to be.
Dad, you were dearly loved and we are going to miss you terribly. But are comforted knowing, we will see you again. From now until then, you will live on in our hearts.

Preceded in death by Parents Andrew and Mildred Munson and brothers Dennis and Warren.

We encourage you to share your most beloved memories of Wayne here, so that the family and other loved ones can always see it. You can upload cherished photographs, or share your favorite stories, and can even comment on those shared by others.

Terry, Judy and Family sent flowers to the family of Wayne Jon Carol Munson.
Show you care by sending flowers

Posted Jan 01, 2020 at 04:12pm
Please accept our most heartfelt sympathies for your loss... Our thoughts are with you and your family during this difficult time.

Flowers were purchased for the family of Wayne Munson. Send Flowers

Terry, Judy and Family purchased the Tender Tribute and planted a memorial tree for the family of Wayne Munson. Send Flowers 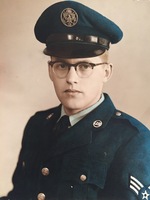