To share your memory on the wall of Merton Strommen, sign in using one of the following options:

Provide comfort for the family of Merton Strommen with a meaningful gesture of sympathy.

Through parish ministry he cultivated an interest and concern for young people, leading him to serve as Youth Director of the Lutheran Free Church, Campus Pastor at Augsburg College, and to pursue graduate training at the U. Of Minnesota in Educational Psychology. In 1960 his Ph.D thesis involved a national study of the beliefs and values of Lutheran youth. He led the expansion of this research in 1960 by founding and serving as president of what is now known as Search Institute. He was a pioneer in research until his retirement from Search in 1984. Merton authored or co-authored (some with his wife, Irene) over 20 books and numerous articles, and in 1983 was awarded Fellow status in the American Psychological Association, following his selection to receive the William James Award for career achievements in the psychology of religion.

The sudden death by lightning of youngest son, David, in 1986 inspired Mert and Irene to help found the Youth and Family Institute as well as a curriculum and major in youth ministry at Augsburg College.

Mert and Irene are fondly remembered for hosting and leading a high school Bible study in their home for over 35 years. Mert served on the Richfield School Board, founded and directed the Augsburg Centennial Singers and lived with vigor through his 90s, playing piano "musicales" in his apartment for fellow residents of Walker Place, his home for 14 years. A lover of music, he played his beloved grand piano until age 100 and regularly attended Minnesota Orchestra concerts from 1938 to the present year.

'Dad' is remembered by his five sons as role model and mentor, a devoted spouse, an engaged and loving father who played touch football and driveway basketball games, loved summer camping trips and hikes up Colorado mountain peaks. He cherished extended family gatherings and took an active interest in the lives of people surrounding him.

We encourage you to share your most beloved memories of Merton here, so that the family and other loved ones can always see it. You can upload cherished photographs, or share your favorite stories, and can even comment on those shared by others.

The team at Market Street Dermatology sent flowers to the family of Merton Peter Strommen.
Show you care by sending flowers

Full Heart was purchased for the family of Merton Strommen. Send Flowers

The team at Market Street Dermatology

The team at Market Street Dermatology purchased flowers for the family of Merton Strommen. Send Flowers

Posted Sep 09, 2019 at 12:58pm
Mert has been an example for me to follow in my career in youth work, both in and outside the church. As a youth, I sang in his youth choir and studied the Bible in his home in Richfield. I watched him successively define the role of youth worker as advisor, then counselor, and finally as advocate. Asked to give a name to the role of the new civilian guards in juvenile detention in Madison, Wisconsin, I suggested advocate. Later, while working as director of a new program for runaways, youth advocacy flowered into a virtual nationwide movement working with runaway youth. Mert's positive approach to youth as having assets to offer surely helped pioneer this movement. Mert's music leadership was part of my inspiration in singing and going on tours with two brothers and a seminary classmate as the Augsburg Male Quartet of 1959 and 1961. Mert came around again into my life when my voice was added to the 2nd bass section of the Augsburg Centennial Singers in 1994. Tours to Norway in 1961 and 1994, enriched my life. Mert's favorite way of typifying the Christian's witness was the sharing of bread by one beggar with another. In this spirit, 600 impoverished and disenfranchised youth here in Mexico have received the benefit of a swing out of the cycle of poverty through scholarships from Christian people in America these past years. Thankfully, Mert and I had a chance to talk earlier this year by phone. He was readty to hear his song sung by the reconstituted Augsburg Male Quartet of 60 years ago. We'll be dedicating the song to Mert's memory on 3 occasions the weekend of Sep;tember 27-29 at Augsburg's 150th anniversary celebrations at student chapel, the Silver Luncheon, and Trinity Church's Sunday service.l "At the foot of the Cross I will linger, 'til I rise from the cross to Thy throne."Goodbye, my good mentor and inspirtation. Rennard Svanoe
Comment Share
Share via:
CS

Posted Sep 08, 2019 at 08:33pm
My mother, Esther (Framstad) Steen, always spoke so highly of her double cousins. She loved them dearly. Going through her old photo albums I found the picture below which was labeled "Lute, Mert, Abner" along with some cousins I assume. Mert was such an inspiration throughout his life. We were all so pround of both he and Irene. Our family sends their love to you all.

Posted Sep 06, 2019 at 04:33pm
Dr. Strommen was a beloved figure at my home church, Oak Grove Lutheran in Richfield. I have very fond memories of attending the weekly youth bible studies, or Discovery Groups as they were called, on Wednesday evenings in the Strommen family home. Condolences to John and the rest of the family. Gary Wood, Racine, WI
Comment Share
Share via: 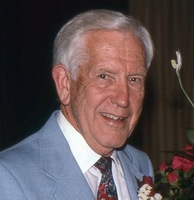