To share your memory on the wall of Dr. William Hedrick, sign in using one of the following options:

Provide comfort for the family by sending flowers or planting a tree in memory of Dr. William Hedrick

Provide comfort for the family by sending flowers or planting a tree in memory of Dr. William Hedrick

Bill was born in St. Paul on February 17, 1927. His brother Patrick Hedrick was born two years later, though their father also died in 1929. Thereafter, Helen raised the two boys with her sister Katie and husband Robert White, who also had two young boys, Robert and Jim. After Robert Sr. passed away in 1942 in WWII, the four boys complied with their mothers’ firm commitment to education by attending Christ the King School in Minneapolis, De la Salle High School, and St. Thomas College. After two years in the Navy, Bill finished college and then medical school at the University of Minnesota. He moved to Rochester for his medical residency at the Mayo Clinic, where he met and fell in love with Deidre Baker. With approval from Earl and Mary Baker--and the support of her siblings with whom Bill maintained a close relationship throughout his life--Deidre and Bill married in 1957.

The couple enjoyed a wonderful family and social life together. They had seven children in a ten-year span and kept an “open door” house to feed and shelter kids from the neighborhood and beyond. Bill put Deedee and children first where his selfless love, positive and optimistic attitude, and his ability to make life fun, challenging, and interesting were greatly embraced. He shared his passion of history and fine art by tugging his family along to museums and symphonies wherever they traveled. Bill enthusiastically attended hundreds of his children’s and grandchildren’s sporting games and events. He was an avid and vocal fan at Gopher football and hockey games with contagious cheering even during those few losing seasons.

For more than 38 years Bill practiced medicine, primarily with Dr. Gerald Mullin, in downtown Minneapolis and at St. Mary’s Hospital. Bill’s care as an oncologist, counselor, and friend for hundreds of patients and their families was genuine, progressive, and professional. He donated frequent care to disadvantaged patients, Catholic nuns and priests, and those in hospice. Bill was uniquely humble and deeply respected the dignity of all persons. He sought to live and practice by Jerry Mullin’s motto: We should each try to help one person at a time - and let that be our cause.

Humor carried the day throughout Bill’s life. His quick wit caught many unsuspecting persons off-guard. At parties and social events, or just during a conversation, if there was a burst of laughter, Bill was likely behind it. Through humor, Bill made the sick laugh, the sad smile, and all the others enjoy life a little more. Bill’s puns and witticisms were legendary and brought smiles to family, friends, and strangers during his entire life.

The family wishes to acknowledge and thank the many healthcare providers, caretakers, aids, and assistants who contributed to Bill's comfort and well-being.

We encourage you to share your most beloved memories of Dr. William Hedrick here, so that the family and other loved ones can always see it. You can upload cherished photographs, or share your favorite stories, and can even comment on those shared by others.

Posted Oct 08, 2019 at 01:11pm
Please accept our most heartfelt sympathies for your loss... Our thoughts are with you and your family during this difficult time.

Flowers were purchased for the family of Dr. William Hedrick. Send Flowers

Posted Oct 05, 2019 at 09:01am
Anne and family, my heart is breaking for you! Bill was an amazing man and friend. His humor and quick wit were something I looked forward to everyday. I am so thankful to have had him in my life for the last 5+ years. Please know that you are all in my thought and prayers as you navigate this difficult journey.
Comment Share
Share via:

Posted Oct 05, 2019 at 08:33am
Anne and family, my heart is breaking for you during this difficult time! I am so sorry for you loss! Bill was a great man and I am so glad I was able to know him and be a part of his life for the last 5+ years. His humor and quick wit were something I looked forward to everyday at the Wealshire. I am going to miss him dearly. Please know that you are all in my thoughts and prayers as you navigate this difficult journey!
Comment Share
Share via:
PH

My thoughts and prayers are with the Hedrick family. Your father gave so much to so many in his professional and personal life, he will always remain in my heart until my final days. I have so many wonderful memories in my youth when I was with your family, and always felt part of the Hedrick clan. 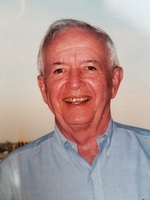