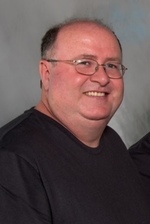 age 58 of Bloomington died October 24, 2019 after a hard-fought battle with cancer.

Terry was born on November 8, 1960 in Madelia, MN to Emmett and Laura (Lorenz) Garten. He married Cindy Van Eyll on July 12, 1986 in Chaska, MN. Terry and Cindy have lived in Bloomington, MN for 32 years. He was employed at Home Depot for 21 years before entering an early retirement.

Terry enjoyed attending games of the Minnesota Twins and collecting sports memorabilia. He coached and supported each of his children’s recreational activities. His hobbies included woodworking and crafting.

He is preceded in death by his parents, Emmett and Laura (Lorenz) Garten; brothers, Rodney and LaVerne Garten; sisters, Shirley Raatz and Mary Garten.