To share your memory on the wall of Robert Perrizo, sign in using one of the following options:

Receive notifications about information and event scheduling for Robert

There are no events scheduled. You can still show your support by sending flowers directly to the family, or planting a memorial tree in memory of Robert Hughes "Bob" Perrizo.
Plant a Tree

Posted Apr 18, 2020 at 02:03pm
Bob and I worked together for many years although we had not been in touch for a couple of years. He was a good man, treated everyone with respect, was honest in his business dealings, had a great sense of humor, and above all was a caring friend to many. He had a heart of gold and would help anyone. My condolences to everyone who will miss him. And there are many.
Comment Share
Share via:
GN

Posted Mar 23, 2020 at 12:22am
We have such good memories of parties at the RedHouse with Bob and Judy, boat rides on Lake Sylvan, Marriuci Fiestas at Camp Confidence. Bob, always in the middle of the action - usually doing great caricatures of famous, infamous and just everyday people, like us. We will miss you, Bob!!
Gretchen and Jack Norqual
Comment Share
Share via: 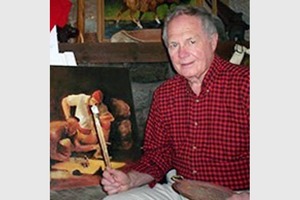