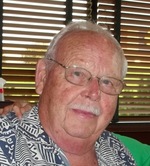 Robert (Helge) Helgeson was called to heaven Sunday July 19th 2020. Bob was born in Glenwood, MN August 19, 1931 to Lila & Rudy Helgeson. Lila & Bob moved to Owatonna when he was a toddler, where he attended Owatonna school. Bob was always a hard worker as a paperboy, and working for his stepfather Fred Langer as a stock boy in Fred's liquor store. Bob enjoyed playing the tuba in several polka bands starting at the age of only 14 .

Bob met Martha Mork and married in 1953 to which 4 children were born Thomas, Debra, Barbara and Douglas. They eventually moved to Minneapolis, then settled in Bloomington. Bob was in the National Guard and he was called up during the Korean War where he was stationed in Great Falls, MT. He finished his service at the 133rd Air National Guard where he was NCO1C of food service. Bob worked many years as a Warehouse Manager at Ferguson (Graybow-Daniels) where he retired in 2002.

Bob and Martha loved traveling and meeting new people. Martha passed away March 2015 quickly after being diagnosed with Brain cancer .She was the love of his life for 61 years. Bob married Jeanette Larson in 2017.

Bob is survived by 4 children Thomas (Linda Black) Helgeson, Debra (Walter) Watson, Barbara (Tim) Koester, Douglas (Holly)Helgeson. 10 Grandchildren, 10 Great Grandchildren and many nieces and nephews. We would like to thank the staff at Fairview Southdale Hospital and at Founders Ridge in Bloomington for the care he received. Funeral arrangements by Gill Brothers Funeral Home 9947 Lyndale Ave Bloomington, MN