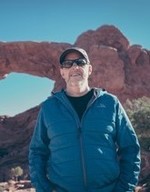 Peter Keswick entered the arms of his savior Jesus Christ on December 11, 2019.

Peter was born in Denver to Arthur and Kathyrn Keswick and moved to San Jose, California with his three older brothers Curtis, Christopher, and Paul. He grew up in a loving and active family. He was the youngest of four boys and was active in Boy Scouts, even attaining Eagle Scout rank. He always had a proclivity for working with his hands, gained through shop classes in school. He met his sweetheart Chrisanne in their senior year of high school.

After studying at the local community college for two years, he transferred to U.C. Berkeley for a Bachelor’s and then a Master’s in Material Science Engineering, or, as Laurie liked to say, “the science of blowing things up.”

Between his bachelor’s and master’s studies, Pete and Chris married, starting their life together in Berkeley. Pete began work in Santa Clara Valley, so they moved to Fremont. They started a family with Natalie and Laurie born there. Pete worked in the semiconductor industry at Applied Materials and then Cypress Semiconductor. Receiving an offer of work with Cypress’s plant in Bloomington, Minnesota, the family relocated in 1997. At the same time, they began homeschooling the girls. Heidi arrived a few years later.

Throughout their marriage, Pete and Chris sought to follow Jesus in family and church community. They loved studying the Bible together and participating with other families in encouragement and worship of the Lord. Relationships made in these communities have enriched their lives without measure.

They also shared the love of the outdoors with the kids in myriad camping, hiking, and kayaking outings. Since extended family lived far away, they added a local hike to every holiday celebration. These included fun activities like “Pooh Sticks” and “see if you can throw the rock onto the top of that stump” games to keep the kids going. Pete always relished leading science experiments and taking the girls on one-on-one Daddy dates.

Pete shared a love for a variety of reading with the whole family, but especially connected with Heidi in the fantasy and sci-fi genres. All the daughters resemble the Keswicks closely, but Heidi shares the same nose slant as Pete; Pete’s was caused by a childhood broken nose, whereas Heidi’s is natural.

Since the move from California in 1997, our family enjoyed many vacations there to visit extended family. Many further special memories and adventures were enjoyed with his parents and his three brothers’ families throughout the years. In 2007, their sense of adventure sent them on a family vacation to France and Germany. Pete and Chris took an anniversary hiking trip to Ireland in 2016, and shared a trip to Paris in 2017. Pete also traveled occasionally with work, notably to Spain, Japan, the Philippines, and Czech Republic. Nothing could beat the north shore of Lake Superior for the perfect getaway, though.

Throughout his adult life, Pete spent much free time woodworking. He loved the natural feel and beauty of wood and delighted in figuring out which type of wood worked best for each project. He created simple furniture like Adirondack chairs and a writing desk, and smaller pieces like chip carved boxes, turned pens, and Christmas ornaments. Over the years, he has been working on a nativity scene set for each of the girls. He also built Laurie’s harp. Recently he completed a master’s course in how to teach chip carving.

Five years ago, we added son-in-law Jared to our family. This brought great joy to all of us. Jared has loved the shared projects, “Dad” jokes, and wise mentorship. Natalie and Jared were blessed with baby Junia in July 2019, which has brought a true ray of sunshine to our lives. Pete loved holding and talking to her and was always very excited to see her.

The depths to which this amazing man, Peter Keswick, will be missed are beyond measure. He showed great honor to his family, friends and colleagues, and his humor and depth of character is inspiring to everyone who knew him. We thank God for his quiet strength and generous heart. He was a sacrificial giver, persistent in prayer, a caring protector, and most of all, a pursuer of God.