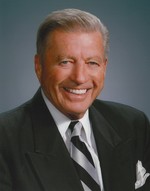 Neil McGraw, the former owner of Gill Brothers Funeral Home, was a veteran of World War II, an active alumnus of the University of Minnesota, and a past Grand Knight of the Marion Council Knights of Columbus. He served on a number of boards in the community, including the Board of Directors of the American State Bank in Bloomington and the Archdiocesan Cemetery Board. He was a former chairman of the board at St. Mary’s Hospital and an active member of Decathlon Athletic Club, past president of the Bloomington Chamber of Commerce, and organized as well as endowed a scholarship fund at Normandale Community College. He was an avid outdoor sportsman.