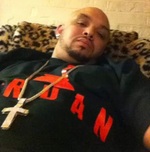 With great sadness we announce the tragic passing of Maurice Speltz, our loving and devoted husband, father, grandfather, brother, uncle, cousin, and friend to all lives he touched, on October 1, 2020. He was in his 38th year. He was born March 7, 1982, in Minneapolis, MN. A son of the late Eddie and Judith Washington.