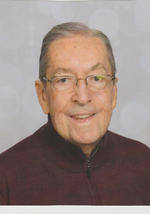 90, Passed away peacefully on Tuesday, June 16 in Edina, MN. Jim was preceded in death by his sister Marian (George) Stockhoff and children Gretchen Gratson and Todd Rowader. He is survived by Sylvia, his beloved wife of 57 years; his four sons and their families; and many cousins, nieces and nephews.

Jim grew up in Prospect Heights, IL where he attended St. James Catholic School and Arlington Heights High School, both in Arlington Heights, IL and University of Illinois (Navy Pier). He served his country in the US Army, stationed in Ft. Lee, Virginia during the Korean War.

He married Sylvia Carmen Melendez and they had one son: James Robert Rowader, Jr. (Theresa Harris).

Most of Jim’s career was as an insurance broker and retired from Prudential Insurance. He was a great golfer, teaching his sons and grandchildren his skill, and passionate White Sox fan. In retirement he worked at various golf courses in northwest suburbs of Chicago. He then moved to Minneapolis, where he will be remembered for his humor and high spirits.

Arrangements for a memorial service are being planned for September 2020.