To share your memory on the wall of Frances Duritsa, sign in using one of the following options:

NOTICE OF CHANGE IN FUNERAL PLANS ....
VISITATION WILL CONTINUE WITH 10 VISITORS AT A TIME ON FRIDAY 6-8 PM. HOWEVER ...FUNERAL MASS WILL BE PRIVATE FOR FAMILY ONLY.

NOTICE OF CHANGE IN FUNERAL PLANS ....
VISITATION WILL CONTINUE WITH 10 VISITORS AT A TIME ON FRIDAY 6-8 PM. HOWEVER ...FUNERAL MASS WILL BE PRIVATE FOR FAMILY ONLY.

Frances Catherine was raised in a close, Irish Catholic family in Fond du Lac, Wisconsin surrounded by loving parents, aunts, uncles and grandmother, her identity forged within that Irish heritage. She was preceded in death by those relatives, including her brother John Feeney McCoy and sister Gertrude Elizabeth Little.

Frances graduated from Fond du Lac High School in 1941 and then completed two years of higher education at Oshkosh State Teachers College before going to work. Her first position was as a laboratory technician at Western Condensing Company in Appleton, WI. In August of 1944, the company sponsored her enrollment for a year at Cornell University to conduct bacteriology trials for them. She returned to Wisconsin and eventually attended the University of Wisconsin-Madison, graduating in 1948 with a B.S. in sociology and a minor in chemistry.

She then began a rewarding career with Fisher Scientific Company, a vendor of laboratory supplies and manufacturer of lab instrumentation. Fran was hired to open a new, one-person sales office in downtown Chicago, at which she excelled. The home office took notice of her work and offered her a position in Pittsburgh, PA as assistant to Vice President, James A. Fisher. At Fisher Scientific she met Earl Duritsa, her husband to be. They were united in marriage on November 14, 1953, first settling in the Washington, D.C. area, then transferring to the Chicago area. In 1964 the family moved to south Minneapolis, where many enjoyable hours were spent overlooking the Minnehaha Parkway from her beloved sun porch windows.

Once her children were older, Fran returned to paid work. From 1970 through 1978 she worked for several small firms in downtown Minneapolis and then began a 17-year career in customer service at United Bearing Company. Her meticulous record keeping, her problem-solving skills, and her kind, easy manner with customers were highly valued at the company.
Fran’s religious faith guided her life. She found within it the God of eternal love who provided great comfort and consolation. As early as 1946 ecumenism was important to her, evidenced by her service on the University of Wisconsin Interfaith Council. She recognized the dignity and worth of every person, no matter what color and creed. Fran searched for deeper spiritual understanding throughout her life including learning and practicing many aspects of the Eastern Rites of the Catholic Church, the church tradition of her late husband, Earl. In her later years she found support and acceptance within her Small Christian Community at Annunciation.

She firmly believed she was on this earth to serve others and did so in many and various ways. Her volunteer activity included work with Erie Settlement House in Chicago, the Association of University Women, the Minneapolis Deanery, and Women in Community Service for Job Corps. She spent several decades as an active member of the Minneapolis Audubon Society serving for many years as their program chair. Sewing for the homeless at St. Stephen’s Human Services brought her particular joy. She leant a comforting ear to those who struggled with depression, and always reached out a helping hand.

Fran continually sought to improve herself and work toward positive changes in this world. She astutely followed politics, hoping to live long enough to vote in the November elections. She loved to knit and to sew - her trusty Singer often on the dining room table - and was especially fond of reading and discussing books with her Book Worms Book Club.
Traveling locally with friends, visiting family and surrounding herself in nature were great pleasures. Her ten years residence at Village Shores in Richfield provided her a new community of friends and fun times; she was noted for her creative costumes at their events.

To send flowers to the family or plant a tree in memory of Frances Catherine Duritsa (McCoy), please visit our Heartfelt Sympathies Store.

Receive notifications about information and event scheduling for Frances

We encourage you to share your most beloved memories of Frances here, so that the family and other loved ones can always see it. You can upload cherished photographs, or share your favorite stories, and can even comment on those shared by others.

Guaranteed hand delivery by a local florist
VS

Posted Mar 18, 2020 at 08:07pm
With fond memories of Fran and deepest sympathy for your loss. May the angels lead her into paradise.

We as Frances's children, want you to know that in light of the covid19 virus and all the concerns regarding it, that if you feel the need to not attend the visitation or funeral, please know we respect your choice. We know practical Frances would also honor your choice. Annunciation Church is spacious and very open, and we assume there will be plenty of room to keep distance between people if that feels best for you. Yet being together to lift our Spirits may be what is most needed right now.
Comment Share
Share via: 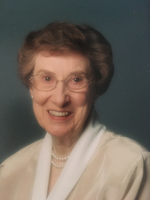