To share your memory on the wall of Elaine Summerfield, sign in using one of the following options:

Provide comfort for the family of Elaine Summerfield with a meaningful gesture of sympathy.

Elaine was preceded in death by her husband, James A. Summerfield, and sister, Elsie (Leo) Cameron. She is survived by her children, Michael Summerfield, Sue (Bill) Macheel, Mary Summerfield (Michael O'Neal), Sheila Summerfield and Judith (Bob) Herington; grandchildren, Bobby and Annie Macheel and Alana and Brynne O’Neal; brother, Harold (Sue) Jensen; and many nieces and nephews and cousins.

We encourage you to share your most beloved memories of Elaine here, so that the family and other loved ones can always see it. You can upload cherished photographs, or share your favorite stories, and can even comment on those shared by others.

Posted Sep 19, 2019 at 06:44pm
Aunt Elaine was a steady and calm presence in my childhood. I remember the Sunday morning breakfast of cinnamon rolls and orange juice before mass, lots of adventures of our family visiting the Summerfields (even to snowy North Dakota), and Holidays we celebrated. "MAY LOVE BE WHAT YOU REMEMBER MOST." -Darcie Sims- Blessings and Peace, Jayne Southard
Comment Share
Share via:
GJ

Posted Sep 16, 2019 at 06:45pm
Mr Rogers was a popular TV personality who wanted to be your neighbor, but Kathrine and I had someone much better, Elaine Summerfield. Elaine was was very knowledgeable and confident, I enjoyed her showing interest in my projects, she would ask what was I was trying to do and often shared with me her suggestion of a better way, we all need a good neighbor who is willing to share their learned experiences.
Comment Share
Share via:
JH

So true Greg! She was lucky to have such wonderful neighbors! 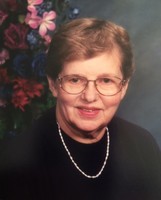