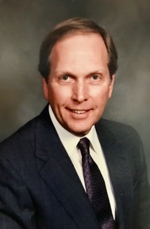 Don was born in Cincinnati OH on May 12, 1931. He graduated from St. Xavier High School in 1949 and then went to college at Xavier University where he graduated in 1953 magna cum laude with a degree in Business Administration. He was valedictorian of his class and was also highlighted as a distinguished military graduate having served in the ROTC. In August 1953 he married his high school sweetheart Doris and then began service in the Army at Fort Sill in Lawton OK. After the Army in 1955 he began his career in insurance and pharmaceutical sales back in Cincinnati. In 1963 a promotion took him, Doris and 6 children at the time to Edina, MN. As a sales manager, he worked for Eaton Labs which became Norwich-Eaton, then acquired by Procter & Gamble, retiring in 1994. His primary focus was on hospitals and doctors in the five-state area including the Mayo Clinic.

Growing up Don enjoyed participating in many sports including pairs roller skating with Doris. As a busy father and team leader, he was involved in all of his children’s activities. He served as President of the Edina Hockey Assoc in the 1970’s. Don was faithful and actively involved in his church as a eucharistic minister, in fundraising, and served as President of the St. Pat’s Men’s Club for 5 years.

After retirement, Don loved spending the winters in Florida with Doris and traveling internationally. He was a proud father and grandfather and was generous in providing for his family. Don was a people person, welcoming, kind-hearted, diplomatic, inclusive and a dedicated man of integrity. He will be deeply missed.

Mass of Christian Burial will be held on Friday, September 25th, 11am at The Church of St. Patrick, 6820 St Patrick’s Ln, Edina. Visitation 1 hour prior to service at the church. Private family entombment at Resurrection Cemetery, Mendota Heights. In lieu of flowers, memorials can be made to Park Nicollet Foundation-Struthers Parkinson’s Center-Support Groups program.