To share your memory on the wall of David Groves, sign in using one of the following options:

Provide comfort for the family of David Groves with a meaningful gesture of sympathy.

Print
VISITATION HAS BEEN CANCELLED

He is survived by his wife of almost 55 years, Andrea Mary, children Laura Vic... Read More
VISITATION HAS BEEN CANCELLED

He is survived by his wife of almost 55 years, Andrea Mary, children Laura Victorine, Lisa Groves (daughter Madeline Mary), David Groves II and Christopher Groves (son Chance, daughters Cadence and Sage). He was preceded in death by parents Ralph and Mary, sister Rebecca, and brothers Dennis and Douglas. He was a devout Catholic and made sure that all of his children received Catholic education, no matter the sacrifice required.

He could fix anything, was a mechanical genius, and was unconditionally reliable. He was the kind of man you wanted to pick you up from the airport - never a minute late and shooing you away if you dared to lift your own suitcase. At 6'4, he had a remarkable physical presence, earning him the lifelong nickname "Moose." He was hard to say no to. He once successfully returned twelve pair of shorts that were over 20 years old because they had frayed, explaining that after all, the store advertised a lifetime guarantee and he was still alive.

From a young age, David was a champion of laborers. He worked on the Pennsylvania railroad, and then as an air traffic controller where he tried valiantly to improve the work environment for fellow members of PATCO. He eventually took a position with MN-DOT, making sure bridges were constructed properly and roads were clear of ice and snow, retiring in 2008.

David had a keen interest in politics and was a precinct caucus captain in Bloomington for several years. He ran for office twice, most recently by making a bid for a Minnesota U.S. Senate seat in 2018. He gave numerous media interviews, sharing his political beliefs to better our country. krocnews.com/meet-u-s-senate-candidate-david-robert-groves/

He was an exceptional grandfather. David and Andrea lived near their first grandchild, Madeline, and spent countless hours with her. He taught her how to play chess, "safety first", to plan ahead, and a thousand other beautiful lessons. David and Andrea enjoyed rides on their Harley Davidson, going to the movies, and playing cards with daughter Laura. He hiked to ancient petroglyph sites with daughter Lisa, and did yoga poses with her in the mountains of Sedona. David cherished all of God's creations, especially hummingbirds and watching lilies bloom. Son Dave knew him as a lover of his stunning yard, one that birds, bees, butterflies, and small animals made their home in. Son Chris shared that when he was seven years old, Dad realized a hardware store clerk had undercharged them on a recent trip by a single $1.00. Dad insisted he and Chris immediately drive back into town to pay the difference. A doting husband, David's wife Andrea wants the world to know that she has never felt more loved by anyone, ever, and never will.

Even in subzero temperatures, he stood on his porch and gave everyone the long "Minnesota wave" goodbye, just so they knew they would be missed.

In lieu of flowers, memorials preferred to Nativity of Mary Catholic Church, 9900 Lyndale Ave S, Bloomington, MN 55420 with a request they be directed to "VEAP", or to a charity of your choice.

VISITATION HAS BEEN CANCELLED
Read Less

We encourage you to share your most beloved memories of David here, so that the family and other loved ones can always see it. You can upload cherished photographs, or share your favorite stories, and can even comment on those shared by others. 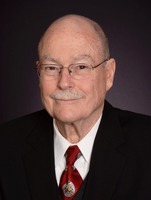