To share your memory on the wall of Bridget Nolan, sign in using one of the following options:

Provide comfort for the family of Bridget Nolan with a meaningful gesture of sympathy.

In high school Gerry would go to the diner in nearby Emmetsburg with her best friend Ellen. For 35 cents they could purchase mashed potatoes, meat and a vegetable (Gerry always pronounced vegetable with 4 syllables not 3!). A cup of soup could be added for 5 cents.

After high school in 1939 women had three choices: get married, become a nurse or a teacher. Gerry chose nursing. She took a train without any conveniences (toilets) to St. Anthony’s nursing school in Rock Island, Illinois. The students lived in dorms and learned on the job working long hours. She stayed on at St. Anthony’s for one year after nursing school. That year involved working 12-hour nights for 6 days per week. The pay? $60 per week. She saw a flier to work for the Veteran’s Association and it was more than double the pay so she applied and was hired.

Her first job as a VA nurse was in Des Moines. Sister Mary lived there so that was a bonus. After about a year she moved to Fort Bard, New Mexico (close to Silver City in the SW corner of the state) to work at a TB hospital up in the mountains with 225 beds. It was isolated to keep the general public safe. The chief nurse there, Catherine McDonough, didn’t think NM was a good place for a young single nurse like Gerry so she convinced her to come to work in Los Angeles in the Valley. Housing was scarce at this time as the soldiers were coming back from WWII so Gerry lived with Catherine. Gerry got hired by Mrs. Cahill in Van Nuys at a big 1000 bed VA hospital (converted Naval hospital). It was hot out there. She worked there for 3 years.

From Los Angeles she moved to Vancouver, Washington with another nurse named Claudette Basler. She worked here for 3 years.

At this time there was an opening in Minneapolis. She had been gone from home for approximately 10 years (4 years of training and 6 years of working). Her parents were getting older and her dad’s health was failing. She took 6 months off of work and cared for her dad until his death. Her mom stayed in Iowa until stroked and then Gerry brought her up to Minneapolis to care for her for approximately 8 years until she died. While in Minneapolis Gerry saw a brochure for Nurse Anesthetist training. She saw the pay and thought, “Well, I might as well do that!” Gerry took 2 years off to do the training which was grueling. She had paid room and board and was trained on the job working 24/7 365. Upon graduation there were no openings so she took her first Nurse Anesthetist job in Cleveland, Ohio. She stayed there for 3 years and “didn’t like Cleveland at all.” As soon as there was an opening in Minneapolis, she came back and never left. Except for the 15 years she managed the trailer park her brother Raymond owned in Big Lake, Alaska. She returned in 2004.

Gerry loved traveling. She traveled all over the world and to all but one state, Delaware. When asked if she wanted to take a quick trip to Delaware just to have the 50 states covered she replied, “Why would I want to go to Delaware? There’s nothing there!”. Gerry loved sweets – especially caramel sundaes. She was a marvelous conversationalist and a witty companion. She was interested in others and had many questions for new people she met. Gerry loved her nieces and nephews and their children. She tried to keep up with their every day events up until the last week of her life. She had a period of time where she was able to use the internet to look up the price of beans and corn. She also had some limited success with the cell phone. She NEVER had a credit card. She was loved by many and a very good friend, especially with Laura and Julius Nolen. The Nolan family lived out of state so she spent a lot of time with the Nolen family in her last 14 years of life. She will be sorely missed by many.

Gerry passed away on July 6, 2019 after 18 months of setbacks and recoveries with her health. She was one feisty 98 years old.

To send flowers to the family or plant a tree in memory of Bridget Geraldine "Gerry" Nolan, please visit our Heartfelt Sympathies Store.

Receive notifications about information and event scheduling for Bridget

We encourage you to share your most beloved memories of Bridget here, so that the family and other loved ones can always see it. You can upload cherished photographs, or share your favorite stories, and can even comment on those shared by others.

Posted Jul 09, 2019 at 04:14pm
Sorry to hear of Gery's death. Gerry was a very good friend of my sister- Clementine Gallus Paick, who also worked at the Mpls, VA, and was also a nurse anestestist (probaly becoming an anestestist at Gerry's recommendartion.) So i met Gerry many years ago, and then I would often run into her at church in Richfield. We had lunch togther about 5 years ago, and I then I never seemed to see her again & when I called, the phone had been disconneted., I too, became a nurse but never worked at the VA. But i know she was very rspected by her peers. I used to play golf at the Fort Snelling golf course on a VA league--many of those nurses knew her, and now in my retirement I play bridge--again with a lot of former VA nurses who knew her. They always thought highly of her. I oten wondered what happened to her. She was a wonderful person. , who could give good senslbe practical advice. Thank you and God bless for caring for her these past years. I will remmeber all of you and her in my prayers. 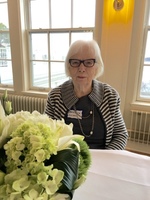