To share your memory on the wall of Archbishop Harry Flynn, sign in using one of the following options:

Harry J. Flynn was born May 2, 1933 in Schenectady, New York, to William and Margaret Mahoney Flynn. He was the youngest of six children. Having earned a Bachelor of Arts and a Master of Arts degree in English from Siena College in Loudenville, New York, he went on to attend Mount St. Mary Seminary in Emmitsburg, Maryland, and was ordained a priest of the Diocese of Albany. After serving at parishes and teaching at Central Catholic High School in Troy, New York, then-Father Flynn was appointed dean of Mount Saint Mary’s Seminary where he later served as vice rector and seminary rector. In 1979, he returned to the Diocese of Albany and served as the diocesan director of clergy continuing education and as pastor of St. Ambrose parish in Latham, New York. In 1986, Pope John Paul II appointed him coadjutor bishop of the Diocese of Lafayette, Louisiana, becoming the fourth bishop of the diocese in May 1989. In 1994, he was named Coadjutor Archbishop of the Archdiocese of Saint Paul and Minneapolis and was installed as archbishop a year later, upon Archbishop John Roach’s retirement. He served in that ministry from September 8, 1995 until his retirement on his 75th birthday, May 2, 2008.

Archbishop Flynn loved being a priest and spent his retirement years serving the people of the Archdiocese of Saint Paul and Minneapolis, joyfully confirming thousands of young people, celebrating Mass at parishes across the Archdiocese, leading retreats, and generously giving his time.

Archbishop Flynn found respite at his family’s home on Schroon Lake in the Adirondack Mountains of New York. There he would regularly entertain many guests over the years and particularly enjoyed cooking fine meals for them, which always led to stories and warm conversation.

While he enjoyed visiting with people and was a consummate storyteller and a powerful preacher, Archbishop Flynn always listened to others first – affirming God’s love for them and finding the good they often could not find in themselves. Those who knew him well and those he had just met called him a “merciful pastor” and felt like he was truly present to them whether they were introducing themselves or sharing something very personal. He was well-known for his Christmas cards, which he personally annotated with individual messages to those on his long list of annual recipients.

He was a tireless advocate for racial justice, the poor and the marginalized, and saw Jesus in every person, regardless of his or her circumstances. He worked closely with religious and elected civil leaders to promote the dignity of all women and men and make them feel welcomed and valued. Because of the important role religious women played in his life following the death of his parents at a very young age, Archbishop Flynn had a special place in his heart and ministry for women religious.

Archbishop Flynn accepted suffering as a true disciple of Jesus, embracing his share in the Lord’s cross, knowing that it leads to a share in his resurrection.

Even in the midst of intense pain in the final days of his life, friends who took him to his doctors’ appointments commented on how he profusely thanked each and every doctor, nurse and medical professional at Saint Joseph’s and Woodwinds Hospitals for their kindness and he blessed them on his way out of the building.

Before his death, he told those who were with him that “suffering was part of the journey into Heaven.” Those present said he suffered beautifully because he trusted in God’s love and goodness and that allowed him the grace to do so.
After being anointed, Archbishop Flynn died at 11:26 p.m., Sunday, September 22, in his residence at the rectory of Saint Vincent de Paul parish in Saint Paul, in the presence of the Blessed Sacrament, surrounded by family, friends, brother priests and his beloved and ever-present Golden Retrievers.

Besides being known as a loving priest, bishop, spiritual father and friend, Archbishop Flynn’s legacy will be one of gratitude. He was grateful for all human life, grateful for his call to the priesthood, grateful to those he was blessed to pastor and serve, and most of all, grateful to God for his love and mercy. Those fortunate enough to have come into contact with him or simply joined him for a Mass he celebrated would comment about how he would always spend a lot of time thanking everyone in a genuine way. At the end of one particular Mass, he told those in attendance that he had to stop expressing his gratitude because his administrative assistant was in the choir and he said if he didn’t stop, she would never make it to work the next day!

Archbishop Flynn is survived by seven nieces and nephews and his many close friends. He was preceded in death by his parents and five siblings.

To send flowers to the family or plant a tree in memory of Archbishop Harry Joseph Flynn, please visit our Heartfelt Sympathies Store.

We encourage you to share your most beloved memories of Archbishop Harry here, so that the family and other loved ones can always see it. You can upload cherished photographs, or share your favorite stories, and can even comment on those shared by others.

Posted Sep 28, 2019 at 07:34am
Archbishop Harry Flynn was a very special person to so very many people and loved by all!!!!! God graced our lives for over sixty years with Father Flynn such a loving and kind presence!!! He will always be remembered in a treasured moment of prayer daily!!! We love you and miss you!!! Rest in peace, with our thoughts, love and prayers always. The Rancourt, Rogers, Smith, Bebe and Waters families
Comment Share
Share via: 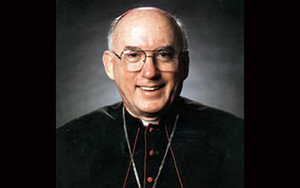