To share your memory on the wall of Adyline Felsted, sign in using one of the following options:

Print
Adyline Johnson Felsted age 98 of Prior Lake and formerly of Minneapolis, passed away peacefully on May 25, 2020. She was preceded in death by her loving husband, Kenneth; and parents, Emil and Lillian (Larson) Johnson.

Adyline was born ... Read More
Adyline Johnson Felsted age 98 of Prior Lake and formerly of Minneapolis, passed away peacefully on May 25, 2020. She was preceded in death by her loving husband, Kenneth; and parents, Emil and Lillian (Larson) Johnson.

Adyline was born in Hastings, MN. She started her singing career at the early age of 7, when she began singing in the church choir – even doing some solos. When she was 14, her family moved to Minneapolis, where she attended Roosevelt High School and joined the C. Wesley Anderson Acapella Choir. She attended college at the University of Minnesota where she completed her Masters Degree in Fine Arts. Bright, articulate and hard-working, during college she took an internship as the executive admin assistant directly reporting to the president of Northwest Bancorporation, where she quick-handedly mastered “shorthand” and managed his full calendar and business affairs with poise.

She was the gifted pupil of veteran artist teacher, Clara Williams, of the Royal Academy of Music in London. As an outstanding student at Berkshire Musical Center, under the direction of Serge Koussevitsky, director, and Leonard Bernstein, conducting assistant, she performed at Tanglewood. In 1948 she was the winner of the auditions conducted by the Associated Concert Bureau, which brought appearances at Carnegie Hall and the Metropolitan Opera in New York City.

In 1953 Adyline received a Fulbright Scholarship to study voice in Brussels, Belgium. Adyline proved to be talented in other areas besides singing. In 1956 she became the Aqua-centennial Ambassadress representing the city of Minneapolis on tour in Scotland, England and France. She wrote the best slogan for that year’s Centennial contest, “Centennial Holiday in Hiawatha’s Playground”.

In 1954 Adyline started a decade of performing in the Christmas opera of Amahl and the Night Visitors. Here she met her future husband Ken, an accomplished baritone singer, who also had a leading role. He and Adyline were married on June 27, 1957 and enjoyed singing together throughout their lives in other light operas, countless weddings and at Temple Israel, St Mark’s Episcopal Cathedral and Westminster Presbyterian Church. They often sang duets for impromptu performances at establishments around Minneapolis where they were recognized by colleagues and invited up on stage. This happened one evening at Murray’s restaurant when they were asked to sing “On the Street Where You Live” during an evening out with Tori and Jeff.

In the late ‘50s Drake University flew Adyline to Des Moines two days a week to teach on contract. She fondly remembered many evenings when she would land back in Minneapolis after midnight to find Ken, asleep at the airport gate waiting for her. He would drive her home to spend that time with her each week, even though he had to get to work early the next morning. She also taught at MacPhail School of Music, Macalester College, and St Catherine’s College and was a voice coach for the Metropolitan Boys Choir and scores of other accomplished students, including Dorothy Benham, who earned the title of Miss America in 1977. She gave many recitals during these years and invited students into her home to share their talents with each other.

In the ‘70s Adyline could be seen on national TV singing the national anthem for Vikings home games during Bud Grant days at the Met Stadium. Her daughter Kathy was living in the Bronx during that time. Kathy’s husband, Paul, was the pastor of a Lutheran Church. He would cut church a bit short on those Sundays so they could rush home to see her sing. They’d be astounded to see her singing without a coat in sub-zero temps! (she did this at the request of the media PR team’s effort to minimize Minnesota’s reputation as being in “frozen tundra”!) She would sing in temperatures as low as 70 degrees below zero wind-chill on some of these Sundays at the Met Stadium in Bloomington, MN.

As a well-known night owl, Adyline enjoyed late night joy rides with her neighbor across the street. When they heard sirens after dark they would meet outside and jump in Adyline’s car to chase the police and fire trucks to see where the action was. In a different instance, a neighbor unaware of her antics called the fire department one night to report smoke coming from the Felsted house at 2AM, only to find that it was steam from the clothes dryer; Adyline was simply catching up on the laundry! The Murray family across the alley on Logan Avenue fondly remembers hearing the clicking of her high heels on the sidewalk when walking her poodles, Benoit and Musette, around the block after 11PM at night. As a dedicated dog and cat lover alike, she later adopted two shelter cats: Bootsie and Cuddles, who were a great comfort to her after she lost Ken in 2002.

Adyline was a fearless and tenacious fighter as well. This attribute served her well, giving her the strength to fight off a purse snatcher at GJs in South Minneapolis, and to defeat a mugger outside O’Garas one night with Ken. However, her biggest battle was won against colon and liver cancer at age 60. She defeated these beasts with her positivity and the help of her doctor, Neil Hoffman, who wrote in an 80th birthday card to her that “she was his only patient who literally had a staredown with the devil and won!”

As an energetic and positive force, she had an enormous impact on all who knew her. Since her retirement in 2000, she continued to teach at home, travel, host fabulous dinner parties and enjoy music in her roles as a well-loved mother, grandmother, great-grandmother, mentor and friend throughout her years. She was an advocate to save the historic Kimball pipe organ and many other causes. Adyline’s outgoing personality attracted many new friends who enjoyed her zest of life, quick wit, wisdom and feistiness right up to her final days.

In lieu of flowers, please direct any memorials if desired to Westminster Presbyterian Church Choir, the University of Minnesota Music Dept, or the Animal Humane Society. Save the date for a Celebration of Life to be held on what would have been Adyline’s 100th birthday on June 21, 2021.
Read Less

To send flowers to the family or plant a tree in memory of Adyline Johnson Felsted (Johnson), please visit our Heartfelt Sympathies Store.

Receive notifications about information and event scheduling for Adyline

We encourage you to share your most beloved memories of Adyline here, so that the family and other loved ones can always see it. You can upload cherished photographs, or share your favorite stories, and can even comment on those shared by others. 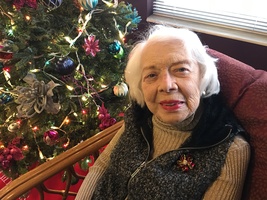